Valhalla Railroad Crossing Design May Be Cause Of Tragedy 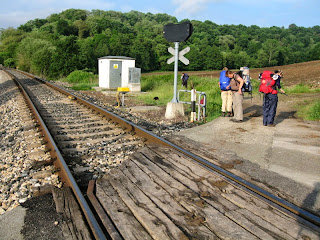 The Valhalla, NY accident that killed seven and injured scores more when a Metro-North commuter train struck an SUV stuck on the tracks and inside the road crossing gates

But could the accident have been prevented with better road design and location of the railroad gates?

Look at the picture above, of a simple crossing. (This is NOT Valhalla, NY.) It is an old design for a rural road. Today's roads have much more traffic.

I suspect there is a design flaw that has its roots in our changing world, old infrastructure, and planning based on assumptions, behavior and conditions as they existed decades ago but which are no longer "safe" given all the changes since they were designed.

Just as old highways and bridges must be retrofitted or replaced to accommodate today's heavier trucks and higher traffic volume, railroad crossings and their feeder roads are no different.

If today we had the vastly lower traffic volume of decades ago, we would likely see a vastly reduced if not totally removed temptation to "beat the light" or "beat the crossing." I would suspect that would result from there being simply less pent-up frustration over either previously encountered traffic or anticipated future traffic. If there is less traffic, one will generally feel much less of a need to "save time." So there is the residual effect on behavior. But I'm not even saying that is the cause, although it is the first thought on many people's minds.


The gates should be farther from the tracks. That is to account for drivers being on autopilot or otherwise very distracted by the many colored lights they see on the road. (Note that I am not attributing anything to distraction from cellphones or other gadgets which now proliferate in today's model vehicle.) It is actually easy to get confused by red lights for RR crossings and red lights for rear side car lights. You may say it never happens to you, or that this one driver was "stupid." But it only takes one incident, one distraction. Perfect drivers for decades get caught in split-section bad reactions all the time. A reaction is not conscious thought. It is a reaction, more like instinct. It can be wrong, but that is applying rationality to a quick, hair-trigger response. Do I stay or do I go, at a particular point in the road. It's not as easy as it sounds, even if you could view it as "contributory negligence" on the part of the driver. (Count on that theory being used in any defense.)

The railroad gates in use up there are like the railroad gates used on country roads 60-70 years ago, when there was far, far, far less traffic and thus far less distraction. The world has changed. The infrastructure has not.

Very simply, today's transportation infrastructure was designed for a much different world. That infrastructure, those style of crossings, even the layout of the roads leading to the crossing, would not likely be employed if the road and crossings were being designed today with today's traffic demands and driver behavior in mind.

UPDATE Feb. 7th: It turns out the state DID have plans to install more warning lights but never got around to doing so.