The Constitution And The Vicious Anti-Christian Cartoons of Charlie Hebdo

The content of this article is offensive, insofar as it republishes highly-vulgar cartoons sharply attacking and mocking the essence of Christianity, in one, and the Roman Catholic Pope in another.

While freedom of speech and expression -- and of the news media -- are under attack, let us also distinguish between defending the right to such speech, and defending the content of that speech.

While we are at it, we should really also draw a distinction between: (a) the freedom to express oneself, and (b) the demand that others react the way we want them to react, and only as we want them to react, to our expression. The latter is really a demand for a nonsensical, nonexistent freedom from responsibility -- that is, the responsibility to acknowledge that all expression causes reactions, and that those reactions are unpredictable, ungovernable and often undesirable.

Legal arguments commonly hide the real agenda behind some artfully drawn phrase or argument. I sense that's the same thing here. I sense the Charlie Hebdo protests are really not about "freedom of speech," but rather about a "freedom from responsibility."

We should remember that, even in the United States, governments routinely attempt to enact laws and regulations which unconstitutionally (and thus unlawfully) target certain speech because of its content. Such "content-based restrictions" are commonly invalidated.  The courts are pretty good -- so are civil libertarian lawyers like myself -- in discerning the hidden, unconstitutional agendas behind otherwise benign-sounding laws and regulations.

The "right to free speech" is one thing. But the use of tyranny, whether through violence, boycotts or organized efforts to induce economic or reputational harm to those with whom one disagrees, is part of an illusory (and nonexistent) "right" to compel either the desired reaction to one's free speech, or absolute silence equating to submission. In short, any "right to free expression" as conceived by the United States Constitution does not -- clearly does not -- include a right to exclude, by any means, the speech of others.

With that in mind, here is my suspicion: When opinion leaders are demanding a defense of the right to free speech, what they really want -- and what they won't admit -- is a defense of the intentionally deeply offensive and, frankly, blasphemous speech. I believe this is a deliberate part of the terrorists' strategy. But look at the following cartoons and decide for yourself. 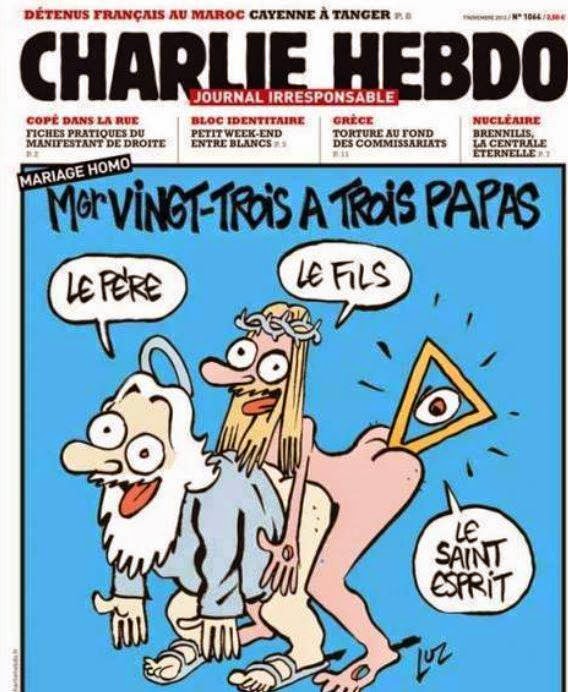 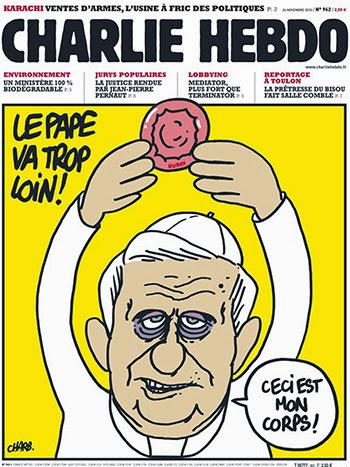