Mets LP, an entity associated with the New York Mets baseball club, took out approximately $47 million more from the Bernard Madoff scam than it invested, according to a Bloomberg News report which cited court papers filed Monday, October 19th by the court-appointed receiver for the Madoff entities, Irving Picard.

Keep reading the report and you'll notice that Mets LP put in a claim for "lost profits" based upon apparently totally-bogus account statements. 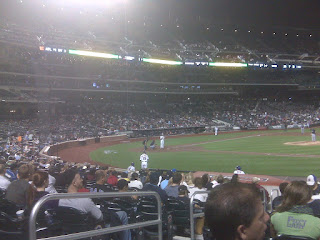 Fred Wilpon's taxpayer-funded shrine to the Brooklyn Dodgers; a/k/a Citi Field (that is, until Citi folds or is acquired by another bank).

At some point, an investor's claim to lost profits based upon such fraudulent documents looks not just intellectually dishonest, but morally dishonest as well.   This is a fundamental and very basic sense, one which underlies the general public's lack of great compassion for some of the self-proclaimed "victims" of the Madoff scheme, many of whom actually profited on a net basis from their investments -- meaning their profit came at the expense of other, truer victims.

The association with Madoff was something which even the most-diehard Mets fan finds hard to swallow.   In my opinion and based on anecdotal observation of other Mets fans, the toxic combination of a once-in-a-generation recession/credit crunch/economic dislocation with the Madoff scandal has caused many rank-and-file fans to become a little more distant with their emotions towards the franchise.   One should then add the specter of the Mets' new ballpark being built with public funds, being christened Citi Field, and then being shrouded in Dodgers memories (from the ballpark's exterior design to the sanctification of former Dodger Jackie Robinson).   In my opinion, Mets fans came to feel that the ballpark symbolized corporate greed, the taxpayer-funded-bank-bailout (also recognized by fans as a big wealth transfer away from them) and the tradition of a franchise which hasn't been in New York in 52 years.

Somehow, I suspect that after the events of the last year (and without even getting into the multiple late-season collapses), a serious segment of Mets Nation is enjoying the misery of Mets ownership...and this may only be the beginning.